The Great Joplin tornado of 2011

(It's somewhat ironic that my last Note was "This Day.")

I haven't seen any of the damage first hand. But from what I'm piecing together... imagine (for my Santa Clarita friends) a force of nature starting at Newhall Ave on Lyons and and demolishing everything from there to I-5. I'm told this may have been a mile wide. From pictures, it leveled everything, cutting a path at least six blocks wide. Does "everything" include sturdy brick buildings? Yes it does. The path the tornado took in Joplin was about 70-80% residential.

I always thought it was a supremely bad idea that both hospitals were tucked in the same corner of town, about half a mile apart. One of those hospitals, St. John's, was hit. I'm told it was "destroyed." From pictures it *looks* like the structure is intact but everything else will need extensive repairs or replacement. A casino/hotel about 5-7 miles away is being used as a hospital. 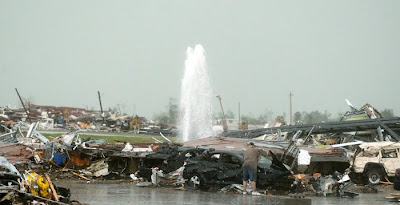 caption: Water gushes from a broken pipe in a building along Rangeline Road.
credit: Globe/Roger Nomer


I took a circuitous route home, around the north side of town, to avoid the problem areas. My folks were without power the last time I had spoken to them. They report they lost some siding off the house. Mom described the storm to me as being on the other side of the railroad tracks. The tracks are about 100-150 yards from their house. There's a ridge about 300 yards beyond the tracks so "the other side of the tracks" is less than 400 yards away. Mara, Rose and Wolfgang were with them when all this happened, hunkered down in the laundry room. That is some scary shit. I had just dropped them off not an hour earlier. I had remarked to the kids during the drive that the clouds looked angry. I had no idea.

At work I was so busy with IT outages that I was mostly shielded from the news, certainly from details. Phone and cell service was spotty over the area. And everybody that had a phone was trying to use it. Luckily I was able to verify and occasionally re-verify that everyone was OK. But it was fairly frantic trying to juggle responsibilities and confirm that my nearest and dearest were out of danger and not taken from me.

As I neared home the clouds to the south were ablaze with lightning. There was barely time for them to grow dark between arcs. Power was out in patches. The light pollution from the city was noticeably dimmer. Traffic lights were out. The path of destruction ended a between one and three miles from our house. The direct suffering this tornado has brought me amounts to inconvenience. We're almost out of laundry detergent. I would go to the nearest Wal-mart super center but there is probably still debris in the road and, oh yeah... that Wal-mart won't be open for a long time. We suffered some anxiety and fear. Sharin had to navigate an obstacle course to pick the kids up and get them home, suffering a flat along the way. Road debris? Can we count that as tornado related property damage? By the time this is over the death toll will probably be in the hundreds. 1000 plus would not surprise me. But me and mine have escaped unscathed.

Which reminds me: Mara won't be going to pre-school in the morning because the church facility where she attends was at least partially damaged. A lot of nice people with good hearts work and attend there. I kind of like the place except for all the displays of archaic torture/murder devices. I don't know how bad the damage was to the buildings. Hopefully not too bad. But it's only about half a mile from St. John's hospital and directly between my folks house and St. John's. Hope for the best, prepare for the worst.

Human interest story: At a fast food restaurant, Wendy's I think, people took cover in a bathroom as the tornado hit. The building was leveled. The survivors had dig themselves out of the ruble. The good new: they all survived. I'm hoping that story is true and stays true. Damn, now I'm hungry.

So far this whole thing hasn't really sunk in emotionally for me. I keep catching myself on the verge of make glib comments, gallows humor. If this had happened the first year I moved out here I'd be on the road back to earthquake/brush-fire/mudslide country. But I've been here so long, it feels like tornadoes aren't real or they only happen to other people. I am completely serious (and completely selfish) when I say I hope it stays that way.
Posted by T_Ray_TV at 1:17 PM