Quick Rebuttals to Moral Objectivity and The Problem of Evil

I share these comments for others to place where they see fit for non-profit usage.   Please attribute to T. Ray or T_Ray_TV when appropriate.  Feel free to substitute "God," "gods" or whatever is appropriate.  The substance of these arguments are millennia old so I am but a curator and editor.  If you notice a grammatical or spelling error please comment so I might fix it for everyone.

The two main points of scrutiny under which your arguments fail are the Euthyphro dilemma and the problem of evil.
The Euthyphro dilemma: Is it moral because Allah says it is moral or, it is moral so Allah commands it? If it is moral because Allah commands it then it is not objective but rather the subjective preference of an entity. If Allah commands it because it is moral then Allah is not the source of morality which would mean not only that we can and should question moral commands (which we do anyway via interpretation and fatwa) but that we should seek the actual source of morality and the alleged Word of Allah should never be more than a suggestion.
The problem of evil: If Allah is existent omnipotent, omniscient and benevolent (or omni-benevolent) then suffering and evil cannot exist. Suffering exists. Evil exists. Therefore, Allah is not what he is claimed to be. To relieve Allah of the blame of suffering and evil is to claim that the omnipotent, omniscient and benevolent Creator of all made a mistake and didn't (or couldn't) fix it. Therefore, Allah is still not what he is claimed to be.
If you value truth over belief you will stop deceiving yourself. And if you truly value morality you will stop deceiving others with paradoxical beliefs which can't possibly be true.

Creationism apologetics are so weak.

Before you try to tell someone that Judaeo-christian Creation and sin are real and that evolution is not, here are some holes in your myth you're going to need to fix first.

First of all, free will is, at best, not absolute.  Evidence and logic suggest that it is mostly, if not entirely, an illusion.  So please don't insult us by trying to justify evil and sin with "free will" arguments.

Second, anything that you create you are responsible for.  Why do you want to claim this doesn't apply to god?

Fourth, the people who created and revised this myth were Bronze Age superstitious nearly-illiterate polytheists. (The subset of priests who prioritized YHWH, took power and edited out most references to Baal, Ashira and the other gods.)  The priests were trying to make the point that YHWH is good, man is bad, we owe it to YHWH to be good (because he made us bad) and that the priesthood has the best answers for making YHWH happy.  Have you donated yet?

Fifth, a scientific theory is an explanation, not a guess.  Just like you have a theory about water coming out of the tap when you turn the knob, scientific theories are always contingent on the possibility of new information... like if you found out your water had been shut off.  Scientific theories are not the truth, they are an approximation of the truth based on the best available evidence.  Whereas Creationism is an explanation based on a book written by superstitious priests with an agenda.

Sixth, evolution doesn't care whether there's a god. Evolution either happened (and is happening) or it didn't.  But when we look at all credible evidence, evolution is obviously real.  Evolution doesn't disprove the existence of gods, it just doesn't require any gods.  It does, however, indicate that modern forms are not the original forms (which contradicts the Genesis story written by superstitious ancients who didn't know any better).  It escapes me why anyone would think that ancient Israelites, who would have been baffled by simple card tricks, would have a better understanding of the world's origin than modern man.

Seventh, you obviously don't give equal consideration to every creation myth, just the the Judaeo-christian one.  What makes you think that every other civilization that thought they had the truth of god(s) was wrong except for this bunch of backwards-ass goat herders at the east end of the Mediterranean?   Out of all the idiots in the ancient world, you're betting that these are the ones that got it right?  You're basing your whole world view on that.  And you want other people to believe the same thing?  Why?﻿
Posted by T_Ray_TV at 7:52 PM No comments:

Political Correctness is well-meaning but wrong

Political correctness is about controlling what can be said in order to control the oppressed/oppressor narrative. It is not the way into a better world.

If we seek a world of equality, telling people what they are not allowed to say and what they must say instead is not the way to do it. But it's easier to be outraged by someone's words than to actually do something positive. So there is a whole movement of people who probably think they are working for positive change by claiming segments of the population are victims and therefore unassailable heroes, that their traditional oppressors are villains and generally sewing dissent. While there is some truth in these ideas they are far far far from the whole story.

The loudest proponents of political correctness look like liberals and generally support liberal/progressive ideals except for one: Free Speech.

When I remember the "I have a dream" speech I can't help but think MLK would be appalled, if not disgusted, by the direction and methods of current civil rights activists.

What is the endgame of political correctness? Because it looks to me like it is the perfect tool for fomenting strife.

God told me to run for President

A friend recently shared this image on social media: 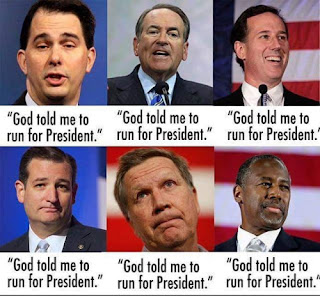 It reminds me of the Christian (?) platitude: "Many are called; few are chosen." 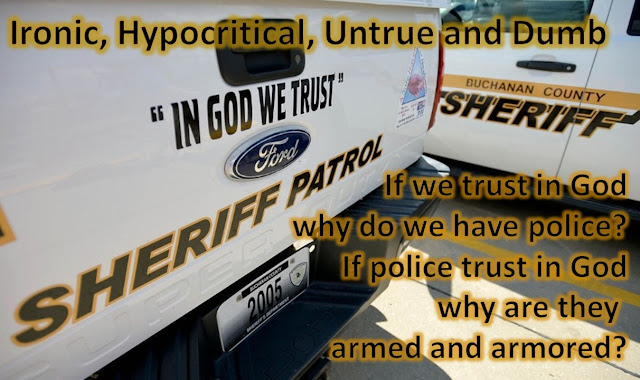 "IN GOD WE TRUST" wrong and misrepresentative

more ranting about the Missouri Sheriffs Association adding "IN GOD WE TRUST" decals to government vehicles
In Aronow v. United States (1970) the United States Court of Appeals for the Ninth Circuit ruled:

"It is quite obvious that the national motto and the slogan on coinage and currency 'In God We Trust' has nothing whatsoever to do with the establishment of religion. Its use is of patriotic or ceremonial character and bears no true resemblance to a governmental sponsorship of a religious exercise. ...It is not easy to discern any religious significance attendant the payment of a bill with coin or currency on which has been imprinted 'In God We Trust' or the study of a government publication or document bearing that slogan. In fact, such secular uses of the motto was viewed as sacrilegious and irreverent by President Theodore Roosevelt. Yet Congress has directed such uses. While 'ceremonial' and 'patriotic' may not be particularly apt words to describe the category of the national motto, it is excluded from First Amendment significance because the motto has no theological or ritualistic impact. As stated by the Congressional report, it has 'spiritual and psychological value' and 'inspirational quality.'"

But it's not "quite obvious."  The explanation offered in the decision is illogical. The suggestion is that the motto is not a religious exercise even while acknowledging that T. Roosevelt argued (long before it was the official motto) that it was sacrilegious. That doesn’t support the decision; that is in contrast to the decision. And the decision claims: “…has nothing whatsoever to do with the establishment of religion.” What else could it be? “GOD” is clearly used as a proper noun. It’s not “IN GODS WE TRUST.” It’s not “IN A GOD WE TRUST.” It’s not “IN SOME GOD WE TRUST.” It clearly invokes the everyday name of the Abrahamic god, namely, God. Aka Yahwei, aka Allah. The way the motto is written what else could “GOD” possibly mean except God?  It may be argued that “GOD” refers to nature and the confluence of natural forces that rule the universe.  Balderdash.  That would make the whole phrase a meaningless tautology. It would essentially mean that we trust that the way things are going to be is the way things or going to be. If the motto does not refer to an actual deity that goes by the name God, then the motto is meaningless and would be almost as embarrassing as a governmental expression of trust in the god of Moses. Why would we have a meaningless motto? Why would anyone push this motto unless it actually meant something? So what does it actually mean?“IN GOD WE TRUST” makes four claims.
1. There is a god.
2. Its name is God.
3. We trust in it. It’s not clear who “WE” is though presumably it refers to all Americans or perhaps all people.
4. It is implied that God is worthy of trust, that we *should* trust in God.

It’s not clear what we trust in it to do, or not do… but apparently we trust in it. As religious statements go this is pretty vague. It doesn’t establish a church. It doesn’t favor a denomination. But it is a pronouncement of a religious belief. In 1956 Congress made a law establishing this religious belief, contrary to the First Amendment of the Constitution. So the Ninth Circuit Court of Appeals demonstrably got it wrong. They claimed it “bears no true resemblance to a governmental sponsorship of a religious exercise.” If not, then what does it bear a resemblance to? And these are not Federal vehicles. What’s wrong with County (where they exist) or State mottos? Why don’t we see a movement to support decals of ‘Salus populi suprema lex esto’ for police vehicles in Missouri? I don’t know how anyone can believe or state with an honest heart that this is not motivated by a desire to promote a religious belief. It is either meaningless or it is an endorsement of the Judeo-Christian-Muslim god. Either way it doesn’t fairly represent the people. It is divisive (or we wouldn’t be having this conversation). And to anyone who doesn’t trust in God or doesn’t want government entities or officials to officially trust in God, it is offensive. And as we are a nation of governments built on secular laws, not faith, it is incredible and disappointing that I am in the minority. Thanks again, Joe McCarthy.
Posted by T_Ray_TV at 12:26 AM 1 comment:

"IN GOD WE TRUST" on Missouri Sheriff vehicles

What is the goal of the decals?  Is it a governmental attempt to promote the god of Abraham, Isaac and Moses?  Even if it were, I doubt anyone will admit this is the official position.  Will it improve officer safety, use of force or judgement?  Is it an attempt to pander to voters with a Christian majority?  Perhaps, but for the sake of argument let’s assume that’s not it either.  It seems clear this is a Public Relations move.  And that’s how it is being presented.  What is the intended effect on relations with the public?   Is it to make some feel more in touch with law enforcement officers, alienate and offend some portion of the community and go largely unnoticed by most?  I doubt that is the intent but that is exactly what is happening.  An attempt to improve public relations is pleasing some (presumably those least in need of improved relations), having little or no effect on many or most and alienating and offending a minority.  As a Public Relations maneuver it seems to have run contrary to its intent.

This is a divisive issue.  That should be clear from the volume and content of the commentary from people in the community. While putting the IGWT decals on government vehicles pleases many people, bores many more and obviously offends some others.  And for what gain?  Public relations?  I’m sorry but you’re doing it wrong.
Posted by T_Ray_TV at 9:23 PM No comments: