Did God create the "evil"?

First, "evil" doesn't truly exist.  It is not a force in the universe.  It is a valuation of behavior and phenomena.  In the absence of subjective experience that valuation does not exist.  It may also be that a subjective concept of fairness cannot exist in the absence of social drives.  (I suspect this is true but I'm not prepared to make such a claim in absolute terms.  Comments are welcomed.)  As a result, what we perceive as 'wrong-doing' wouldn't be perceived as wrong without social instincts or culturally learned social norms (which stem from social instincts).  If somehow we managed to be social creatures in a world where harm were not possible we probably couldn't conceive of wrong-doing or evil as no action could result in consequences worse than lost opportunity.  Evil is merely a shorthand for behavior and phenomena that offend our desires for fairness and freedom from harm.

Second, in a theological god model, we need to separately consider (a) the creation of a world which allows evil (harm and unfairness) from (b) other actions by that god that we might perceive as unfair or harmful.
a.  Should we hold the god accountable for harm that results from creation of a harm-enabled environment?  For example, if someone were to put broken glass in a playpen and also put a baby in the playpen can we blame them for the cuts the baby will almost inevitably receive?  It may seem a straw man argument in that the baby lacks awareness necessary for alleged free will, but (1) real babies are really harmed in our real world and (2)  and even as aware adults our awareness is never complete; thus we are susceptible to harm we can't be adequately aware of.
b.  Additionally, a theological god is 'at work' in people's lives.  And if in our material world wherein we cooperate and compete for resources, is it possible for such a god to tip the scales in any one person's favor without tipping in a less favorable way for other people?  There may be exceptions but generally the answer is: no.  If we are to assume God had a hand in David's victory over Goliath it shouldn't be hard to see that from Goliath's perspective (and that of the Philistines) God's intervention was evil (unfair and harmful).  Who created that evil?
Third, let's not overlook natural evil.  I think we can generally agree that animals are capable of experiencing pain.  (They have nervous systems.  If they didn't they would suffer the same consequences as congenital analgesia patients.)  Most animals die painfully... to predation, disease, trauma.  Natural disasters produce massive concentrations of suffering to humans and other animals.  And, "Most accidents happen in the home."  Were we placed in a world created for us yet is obviously out to get us?  It might be argued that harm has benefits.  And it's somewhat true, in a tautological way.  When we get hurt we learn to value freedom from harm.  But if the world weren't harmful we wouldn't need this lesson.

Fourth, did the god create the animals?  With varying degrees of denial of a natural bio-genesis and evolution we have to consider where these animals came from? 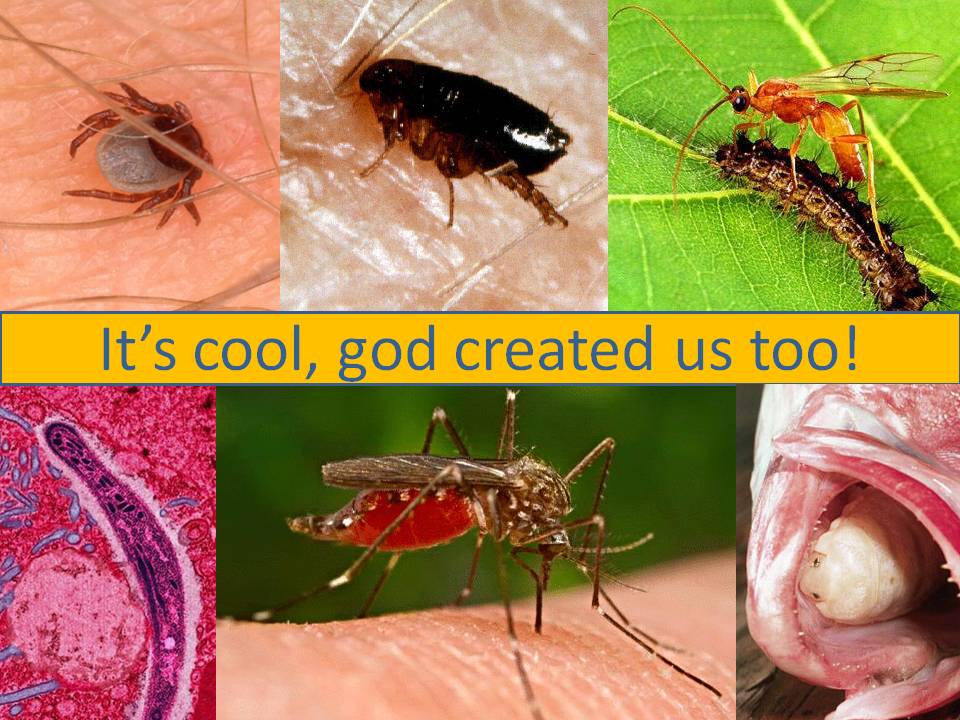 Fifth, does (or will) evil 'exist' in Heaven?  If not then how can all the reasons evil is necessary on Earth suddenly become unnecessary in that change of venue? There are arguments (rationalizations actually) for why we might 'need' to experience a temporary world of suffering before we experience an eternal world without suffering.  But these postulates really don't hold water, especially considering the vast range in both duration and quality of life we experience.  How long does a baby, child or young adult need to live before they've met the heavenly prerequisite?  How much must they suffer first?  The whole concept of this life being a necessary evil as a stepping stone to a perfect afterlife is intellectually bankrupt.  And if it is true that good is not possible without the presence or potential for bad, it doesn't bode well for the ultimate good of Heaven.  (I half expect someone to claim that the "bad" of Hell allows for the "good" of Heaven, or some special case pleading for Heaven/God.  Feel free to preemptively counter one of these claims in comments.)

Some believe that good vs. evil is about picking sides, choosing to be on the side of good.  In the sense that behavior that is 'good' is behavior that is beneficial to something (perhaps humanity or some part of it) and behavior that is 'evil' is harmful to something (perhaps humanity, perhaps a fly that has just had it's wings removed) you're either acting in our (humanity's) favor or against it.  (I would argue that even in the example of torturing flies, humanity is harmed even if it's only morally, philosophically or on some academic level.)  But no one is going 'pick a side' and strive to do 'evil' at every possible opportunity.  Likewise, those who consciously choose to pick the good side are going to make choices along the way that will do more harm than good, knowingly or otherwise.  Sure, you can pick a side, but it's merely an abstract and unrealizable ideal.  It might be better to realize that as humanity, and life in general, are going to outlast you, your greater responsibility is to them, rather than yourself.

Did God create the "evil"?  If a god can take any credit for the creation of this world and the good things that exist in it, then it must also be accountable for the world it created and the evil things in it.  Just as we would hold accountable any human creator that knowingly unleashes harm into the world.
Posted by T_Ray_TV at 8:13 PM