One nation, above all gods

News item: The Obama administration does not want “under God” removed from the Pledge of Allegiance. link

This republic is not one nation under God. To say that it is, establishes the government and the governed as subordinate to a deity. This is not OK. Even if it read, “one nation, under some undefined supernatural entity," it would still not be OK as that would still imply recognition of a higher authority for America and Americans, ALL Americans . The United States government does not have the authority to unilaterally create a treaty with absentee supernatural forces. Why are we surrendering? It could even be inferred from the subordination, that the US derives its authority from such an entity. The United States government did not and does not derive its authority from a supernatural source. If we made that claim then anyone having a superior claim to knowing the will of the vague or specific god could challenge our authority to confederate, legislate and self-govern. It might also be inferred that, as a subordinate to a general deity, the US is a deist theocracy, or worse.

All that would be bad enough but the current pledge says "under God." So it's not a just a noun it's a proper noun. It's a name; the name of the abrahamic god; the god of Judaism, Christianity and Islam. The pledge makes the US not only subordinate to a vague deist god but a specific, named god of three religions. For anyone who holds a religious belief contesting the existence and/or authority of the abrahamic god, reciting the pledge prohibits their free exercise of religion. This alienates followers of Jainism, Buddhism, Scientology, Sikhism, Hinduism, Shinto, Taoism, Paganism, any number of indigenous belief systems and also non-believers. The alienated must choose to forgo the pledge, miss-cite it or display deference to the abrahamic god, if only nominally.

Regardless of anyone's religious beliefs, the US is a secular state. We operate as a nation of laws. We derive our authority for self governance not from the supernatural but from the people. Any statute that grants or recognizes deference to a vague or specific supernatural entity undermines the authenticity of our self governance, establishes subordination to a religious entity and encumbers the free exercise by those with conflicting beliefs.

The pledge is defined by U.S. Code, Title 4, Chapter 1, § 4. And while no one is likely to get arrested for messing up the pledge, The U.S. Code is law, enacted by Congress. How and why the 1954 addition of "under God" hasn't been overturned by the courts should baffle anyone who respects our integrity as a nation of laws.

And just so no one has to look for it elsewhere:
"Congress shall make no law respecting an establishment of religion, or prohibiting the free exercise thereof; or abridging the freedom of speech, or of the press; or the right of the people peaceably to assemble, and to petition the Government for a redress of grievances." ~First Amendment to the United States Constitution 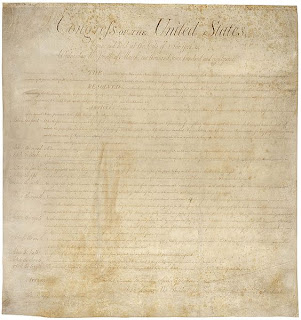 With an election right around the corner the last thing President Obama needs to do is lose support from the rest of the god crowd. I can’t hold this against him. On this issue, at this time, my cynicism outweighs my idealism. It does seem as though he genuinely prefers the phrase in there. That’s disappointing. It’s really Congress’s or the court’s job to take it out. I’d prefer it were the court. But with the current lineup on the bench (ie, corporations are people) now is probably not a good time.
Posted by T_Ray_TV at 11:37 PM